What Hillary Clinton Means to Me 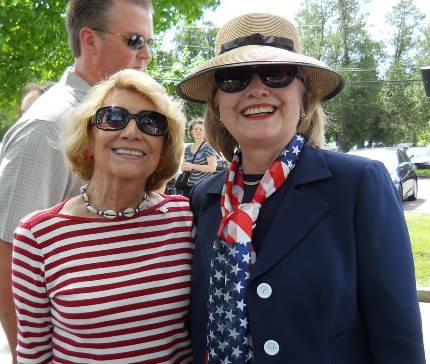 Hillary Clinton was the first First Lady of my generation, and she was spectacular: smart, industrious, compassionate, and articulate. As a resident of the New York metropolitan area, I much appreciated her nose-to-the-grindstone work as a senator, particularly in the aftermath of 9/11. But when she declared for the presidency in 2007, the fireworks went off in my head. “That's it! That is IT! Yes! YES!” The smartest girl in the CLASS was running for the highest office in the land and strongest position in the world. I was 100% on board immediately.

As her campaign rolled out, Hillary more than validated my initial support. She was logical, organized, thorough, assiduous, gracious, patient, and generous. Every speech, every debate, every interview impressed me. She was clear in her message, firm, and stalwart in the face of extreme vitriol and sexism. She was my girl. When she did not get the nomination, I was devastated.

To console myself, I participated in some online forums and Facebook groups dedicated to Hillary and also began blogging about her. The blog was originally a personal comfort – a place where I could curl up and shed my tears in the form of comments or sometimes rants. It was also a place where I could post news about Hillary who remained a leader - my leader – even though she would not be on the November ballot.

When Hillary became secretary of state, every one of these social media platforms exploded – the forums, the Facebook groups, and my blog. I spent the next four years blogging about Secretary of State Hillary Clinton. I gathered photos, speeches, videos, and op-eds. I also began gathering visitors. I published her daily public schedules and kept an eye open for news about her. Folks stopped by regularly to see what Hillary was doing.

After she left the State Department, I continued blogging about her. I posted her speeches, essays, and her book tour stops. Her followers remained dedicated to her, continued to visit, and speculated about what might come next. I have never seen a group of people remain so fervent, so consolidated behind a political figure over such a long.period of time. Her 2007 supporters were still together, still following her, still hoping.

When she entered the 2016 presidential race, I joined the social media brigade and used the blog to promote her campaign as well as several Facebook groups and Twitter. She kept us all busy! There was a lot of work to do, and I tried to get as much information out as possible including her speeches, photos, statements, issues, and policies as well as providing information about upcoming events and actions.

We were warned not to be overconfident and not to stop working. We stayed on task right through Election Day. Like almost all of her supporters, I really thought this time we would do it.

The blog continues updating visitors on Hillary's news. As long as Hillary remains a public figure, I intend to keep blogging about her. To me and to my regulars, she is a hero. Her example and her words inform our own actions and strategies.

I have been fortunate enough to have met her a few times. She has always been gracious, natural, friendly, sweet, and warm as well as encouraging. I have thanked her in person and in letters for her dedication in public service, and my readers have registered their appreciation and continue to do so.

Here is a thank you letter posted on the blog two days after the election. Readers chimed in with their own thanks as well. I sent this post and all the reader comments to Hillary just before Thanksgiving.


"Dearest Hillary,
We guess it is now OK to address you as Hillary since we have been on a first name basis for awhile now in emails (and we are thrilled). How do we thank the woman who left it all on the field in the biggest contest on earth? You have inspired and encouraged us in so many ways.
Thank you, Hillary, for all of your hard work, for all that you have taught us, for all the punishment you have taken, for being the first woman to win a major party’s presidential nomination. Thank you for always smiling, for fighting back when you had to, for being a role model for little girls and women, for running with honor, and for being our face to the world as secretary of state and as a presidential candidate. Thank you for your lovely graciousness, for your warmth, for your interest in our issues, and for taking the trouble always to look beautiful and unruffled. Women know what that takes. We appreciate it. Thank you for your boundless energy that spurred us on even when we thought we would collapse from the pace. So many times when we were waning we would “Hillary up” and move on to the next task.
Thank you for being an exemplar of what women can achieve given opportunity, a plank in your platform, not just in 2016, but all of your life. We know that being a public figure has never been especially comfortable for you, but you knew that being public made all of us more visible.
Thank you for being even-handed and fair. For all of your encouragement of women and girls, you never ignored or forgot the little boys. You included them, and they heard you. Despite media hype, you had solid support from men as well as women because you listened to everyone’s stories and concerns.
Thank you, Hillary. You are our hero! We all love you. We mean it!
With all our love always,
The Still 4 Hill Community
P.S. (From the author: I know that every single time I have ever been in your presence I have seemed to be reciting a litany of thank yous. They are from the heart and sincere. I am privileged to have made your acquaintance and thankful for all you have done. Happy Thanksgiving!)"

For me and for many of us, it was not so much about her being the first woman POTUS. It was that she was the best candidate, the best we had ever seen. Centralizing women and girls, of course, was a
big issue, but it was one issue among others, all interrelated which Hillary alone among candidates so expertly wove into a cloth – a banner – centered on love and compassion.

Especially in these bleak days, Hillary's leadership, her point of view, her tirelessness and fearlessness stand as an icon for many – and not all of those who stand with her are women. She is a leader for our time. She makes us proud. More than 65 million voters agree. Hillary Clinton represents the virtues: faith, hope, and love.