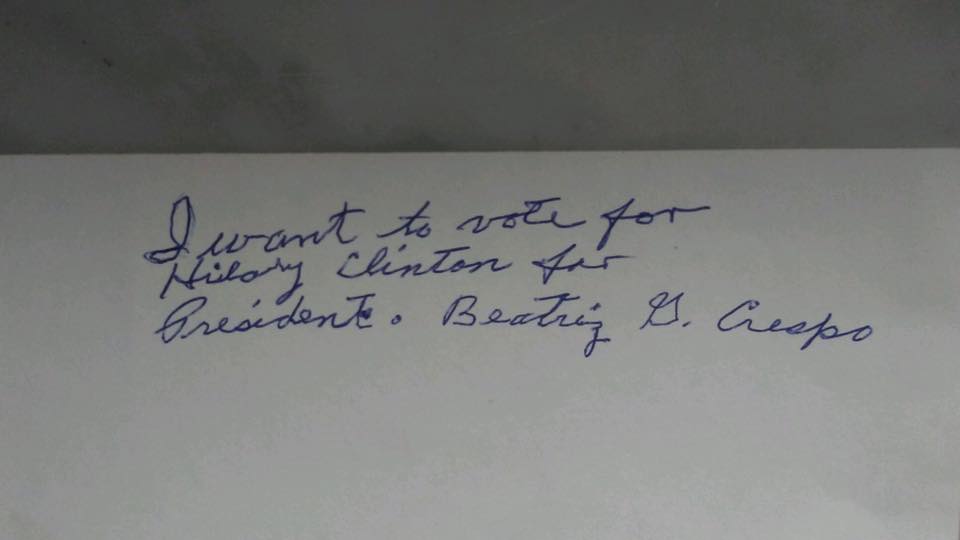 My Abuela has been republican her entire life. She was a political refugee from Cuba, so naturally she was super Catholic and strayed away from politics that had more socialistic tendencies. This past election, at 88 years old, she recognized what was happening in our country. She realized the polarizing effect Donald Trump has had on our nation and, like most others, she was scared. She heeded the Pope's warnings about Christians wanting to build bridges instead of walls. She would tell me she remembered Clinton. She remembered how intelligent she was and the work she did for children, and she told me and anyone who would listen that Clinton was who she wanted to be president in 2016.

Her dementia had gotten pretty bad around the past November and she was really nervous she would forget to vote for Clinton or that since she was a registered Republican, no one would allow her to vote for Clinton. So she wrote this note in her scrawled handwriting and brought it with her everywhere. "I want to vote for Hillary Clinton for president. Beatriz G. Crespo."

She passed away about 8 weeks later due to complications from the surgery she received after breaking her hip a few days after Christmas. My world has gone dark without her light and I know I will miss her ever day. Jokingly, to make myself feel better, I like to tell everyone she couldn't stand to see someone as hateful as Trump as our president and decided she should make her exit then. She outlived Castro and missed out on Trump and I think that is exactly what she would have wanted.