WE are with her tOnight, Tomorrow, and Forever 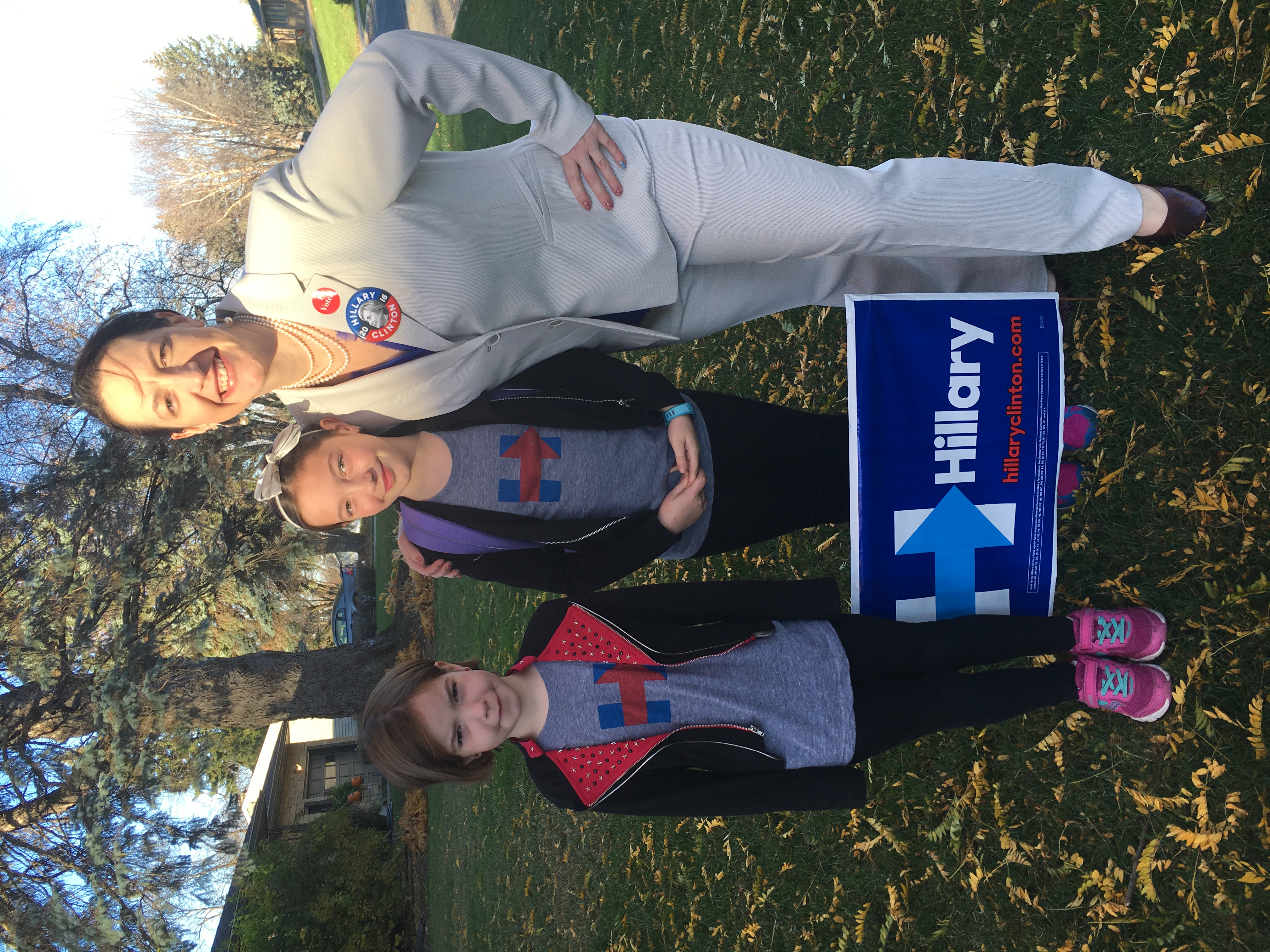 This is what I wrote on Election Day to the world (and posted on FB with the picture included here): "Thank you, Hillary, for giving us a reason to celebrate, to laugh, to cry, and to come together. To remember all the women that have come before us. I've shared so many stories of powerful women with my girlies over these last months, you've shown them that we are #strongertogether, their voices matter and #lovetrumpshate. #Wearewithher tonight AND tomorrow!"

Here is what I wrote the day after the election: "I spent the last days of this election simultaneously lifted up by 3 million women and allies wearing pantsuits who believe, in the words of Senator Wellstone, "We all do better, when we all do better," but I also spent time reassuring my sweet M this morning that I had lived through a Bush presidency and that political miracles had happened since then (with a lot of hard work), like Minnesota being the first state to stop the tide of anti-gay marriage constitutional amendments. Promising her that she is valued and loved and Mommy has special training to help people become citizens and that I can also go to deportation court to help her friends at school should it come to that.

But, it feels personal that, politics aside, half the country thought it was appropriate to elect a racist, lying, sexual predator to the highest office of the land, rather than the woman running for office (who also happens to be the most qualified candidate in the history of candidates). I am repulsed. I am disgusted.

To my people, I love you: my daughters, my husband, my girlfriends, my Black Lives Matter people and my people of color, my immigrant (former) clients, my GLBT friends and relatives, my people that NEED Obamacare, my people that need mental health services. All of you, I love you. You are me and I am you and we will hold each other up.

There must be a quote from To Kill A Mockingbird for today, but my eyes are too puffy to look for it. So here is one, from a Pantsuit wearing sister that sums up how I'm going to try to move forward today:

SAM: I know. It’s all wrong. By rights we shouldn’t even be here. But we are. It’s like in the great stories, Mr. Frodo. The ones that really mattered. Full of darkness and danger they were. And sometimes you didn’t want to know the end. Because how could the end be happy. How could the world go back to the way it was when so much bad had happened.

But in the end, it’s only a passing thing, this shadow. Even darkness must pass. A new day will come. And when the sun shines it will shine out the clearer. Those were the stories that stayed with you. That meant something. Even if you were too small to understand why. But I think, Mr. Frodo, I do understand. I know now. Folk in those stories had lots of chances of turning back only they didn’t. Because they were holding on to something.

FRODO: What are we holding on to, Sam?

SAM: That there’s some good in this world, Mr. Frodo. And it’s worth fighting for.

My pearls are on, my resolve to stand up and keep fighting is stronger than ever, even if I openly weep today in public."

Fast forward to Feb. 19: (By now, we've marched in MN, we've sent postcards, we've made so many phone calls that I've got my senators on speed-dial and I'm openly contemplating running for office). Our little town (you've likely heard of it--St. Anthony, MN, is notorious for being home to the Police Officer that killed Philando Castille), and it's fairly fractured. A number of us had been holding a weekly rally at City Hall/Police HQ holding up, "All Are Welcome Here," signs in rebuke of the 'Muslim Ban,' and in rebuke of our Police Department/City Council that seems unable to admit they need more training or that things need to change. And here is what I posted on FB:

"The prior Sunday, we thought we were going to gather with neighbors (on a moderately busy street) and show the world that we love immigrants and love trumps hate (just as we had done the previous two Sundays). The only problem: we weren't very organized and people didn't show (and/or we were late and everyone had gone home). M, my spunky-leader at under 10 years-of-age, wanted to get out of the car, regardless, and hold up our sign. I hesitated because I felt vulnerable being the only people out there and I wanted to shield her from the icky people that we've seen out there before; the ones that flick us off or roll down their windows and yell, "Trump, Trump, Trump," or much much much worse. When there is a big group, she holds up a sign for a bit, but then she hangs with her friends not paying much attention to the cars going by. Eventually, I convinced her that we'd run a few errands and then drive by and see if anyone was there. No one was there, so I drove on by to go home. She was mad that I wasn't going to stand up!

On Feb. 19, we showed up again and no one was there (yet). She said, "Mom, we are getting out and holding up our sign, even if we are the only ones out there. You said we have to stand up for those that need protecting and I've been worried about my classmates that need protecting." So out of the car we go and this child, my child, stands on the side of the road holding up our sign.

Eventually others showed up, and there were the icky people, but I was reminded that now is the time for courage and it shall be the children that lead us."

Hillary (You-Will-Always-Be-Madame President-To-Me), you showed both of my daughters and me that we need to keep standing up. Thank you. We are with still with you, today, tonight and tomorrow.