I can Do Anything 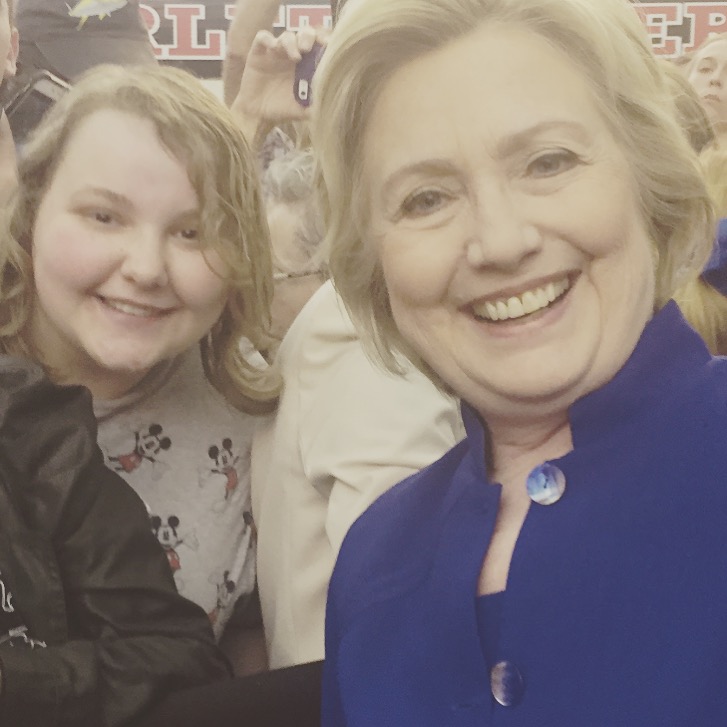 I remember being 12 sitting in my 7th grade history class talking about the upcoming 2008 election. The class took a poll of who we wanted to win the election. At that point it was October of 2008, and the primaries were well over and Senator Obama was ready to take on Senator McCain in just a few short weeks. While I was hoping for an Obama presidency, I was disappointed that my hero, Hillary Rodham Clinton was not going to be our next president.
Fast Forward to 2015. I am now a Sophomore in college studying political science with the hopes of one day running for office whether it be on the local or national level. I was sitting in my dorm when Hillary's campaign video went viral. I was jumping and cheering because I felt in my heart that she was going to be our next president. While I was only 12 when she ran in 2008, I felt bad for not doing something more for the election. I decided to get as involved as I could. For the first year of her candidacy I registered dozens of my friends and acquaintances to vote for her in the upcoming primary that was to take place on June 7th in NJ. One week before the primary, Hillary hosted a rally in Newark, NJ. Hearing Sec. Clinton speak was a life changing experience for me. I felt inspired and motivated to do whatever I could to ensure a victory for this revolutionary. I was fortunate enough to shake her hand and take a photo with her. She was nothing but kind and gracious to everyone she came in contact with.
After meeting her running mate, Tim Kaine in Bethlehem, PA I was recruited and accepted to be an intern for the Hillary for America campaign stationed Bethlehem. I lived about an hour and a half away and commuted there 4 times a week to canvas, phone bank and register voters. It was the greatest experience I ever had. Just being around other people who were just as excited and inspired by Hillary. Election day was upon us and I was ready to celebrate not only just Hillary, but the fact that the glass ceiling would finally be smashed. Unfortunately... it wasn't.
Watching the few speeches Hillary has done between the election and now has pulled me out the funk I was pushed in on November 9th. I feel more motivated now than every before to do whatever it takes to smash that ceiling once and for all.
Hillary Clinton has always been my hero. Ever since I was a young girl I dreamed of accomplishing as much as Hillary has done in her lifetime. If I can accomplish half of what she has done, I would feel like a real success. Millions of young girls, young women, and older women are constantly being inspired by all that Mrs. Clinton has done for us. We will forever be grateful and I hope she knows that. Hillary Clinton has personally showed me that with power and resilience I can do anything. Thank you Secretary Hillary Rodham Clinton.