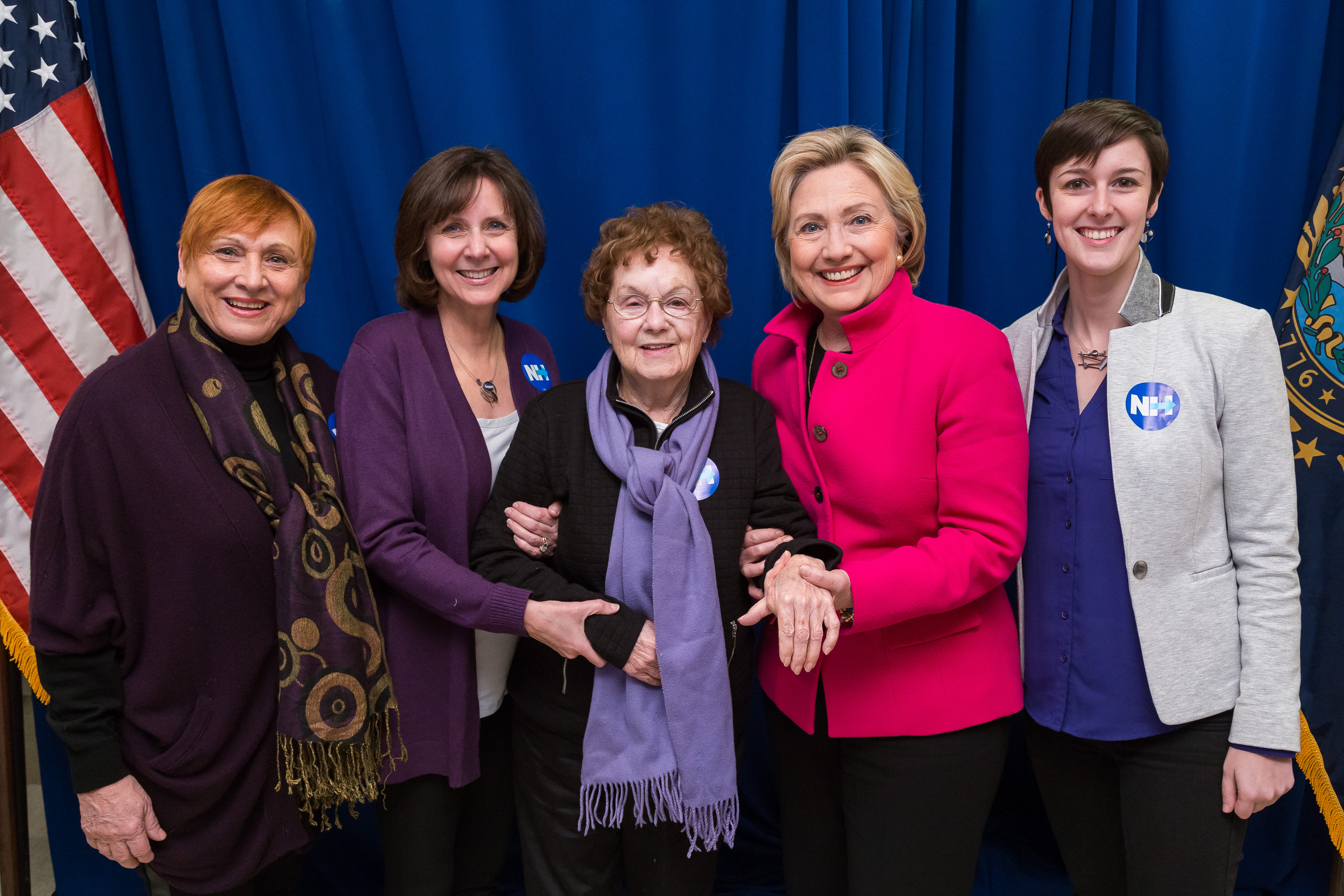 My name is Brenda Bouchard, and I live in New Hampshire. In July of 2015, in Dover, New Hampshire, I met Hillary Clinton at her first Town Hall Meeting of her presidential campaign. It was my privilege to ask Hillary her very first question at that town hall meeting.

My husband has Younger Onset Alzheimer's Disease. I've been caring for him for nearly 12 years. My 90-year-old mother also has Alzheimer's disease. I am her caregiver, too. I asked Hillary what her plans would be for Alzheimer's if she were to be elected President. She responded with a very well-thought-out-answer, taking into consideration people living with the disease, their caregivers and the expense and cost to families and our country. I was so impressed with her response, and after all this time, I am even more impressed today!

Hillary never forgot about us after that town hall meeting. She shared our family's story as she campaigned across the country. She met with other families living with Alzheimer's and listened to their stories. She also met with the Alzheimer's Association's public policy people and top medical researchers, and for the first time in presidential campaign history, a presidential candidate, Hillary Clinton, laid out a thoughtful and comprehensive plan to prevent, effectively treat and cure Alzheimer's by 2025. Wow! First time ever! Historical!

Alzheimer's is a public health crisis. With Baby Boomers aging, Alzheimer’s is on track to bankrupt our country, yet no other candidate in history has ever acknowledged what is happening to our country and to millions of families across our country by conceptualizing and laying out a plan. Not a one!! No other candidate has acknowledged in this manner the impact Alzheimer's has on families emotionally, socially, physically and financially…that is, until Hillary!

I am an Alzheimer's advocate. I personally asked 14 of our presidential candidates their plans for Alzheimer's during the run-up to the New Hampshire presidential primary. My questions were asked in a non-partisan manner, as Alzheimer's isn't a red disease or a blue disease. It's a purple disease, and it is non-partisan. It's an equal opportunity disease. Hillary was the ONLY candidate who listened intently, heard us, understood and ultimately presented her proposed policy. She cares! She truly cares! Deeply! About us! About our country!

When Hillary announced her proposed policy, I decided to publicly endorse her (truth be told, I supported Hillary privately from Day One). I subsequently was honored to introduce Hillary at a Town Hall Meeting in Portsmouth, New Hampshire, on December 29, 2015, one year ago today. Surreal that it was one year ago! I was so proud to make that introduction. Hillary invited my family (including my 89-year-old mother) to the meeting on that very snowy afternoon, and she also met my Younger Onset Support Group prior to the town hall. That was yet another meaningful and significant moment as Younger Onset doesn't get the attention it deserves and needs. Hillary really cares, and that was apparent that day. Hillary touched down on real people and real families during her campaign. That is what elections are supposed to be about, regular people and their families. Our family experienced firsthand the organic nature of Hillary’s campaign truly being about all of us and our country.

I saw Hillary a week before the election and said to her: "Thank you for all you have done for Alzheimer's! I know you are going to win, and I know you are going to be a GREAT President!" We gave each other a very heartfelt hug. It was a very special moment. I was filled with so much optimism, enthusiasm and excitement for the future of our country (and for an end to Alzheimer’s). That's what so many of us thought - that, of course, she was going to win. So today is particularly bittersweet for me and my family as it the one-year anniversary of the day I had the honor and privilege to introduce a woman I truly admire, believe in and respect, who has done so much for our family and for the entire Alzheimer's community and who I thought was going to be our next President.

I am still shaken by what has happened to our world. Things feel upside-down. What has happened to our country’s values, humanity, care, concern, connection, support and love for one another that I firmly believe is an innate and integral part of who we are as a country and a culture? I struggle with that question. A lot. But then I think of all that our family (and others like us) has endured with Alzheimer's for so many years, of all the inequity and discrimination countless others in our country have experienced in their lives, and I also think of all I've come to understand about Hillary’s life, the injustices, hard knocks and unfairness she has experienced ... and yet, she perseveres, carries on and continues to care. And our family, and all of us, we keep on keeping on, our values, humanity, care, concern, connection, support and love for one another on full display, shining brightly – even brighter than before - and I feel hopeful!

I think about Hillary every day as I can't imagine how difficult this loss has been for her. BUT I believe she has made us stronger and better and even more resilient by her life example. If she can carry on, we can, too. She has brought us together in a different way now, with a more visceral connection - and that is a silver lining. And while an enormous door has closed for Hillary, I truly believe that the biggest window in the world will open for her. I'm confident that the best she has to offer is yet to come.

Thank you for shining a bright light on Alzheimer's, Hillary, and for bringing Alzheimer's into the national spotlight! Thank you for hearing our family's story, for caring about all of us in Alzheimer's World, for acknowledging the issue and making us feel heard, for seeing the bigger picture, for working to put a plan in place and for bringing our community’s stories to light. We will NEVER forget everything you have done for all of us. We are very much Stronger Together because of you. Thank you, Hillary Clinton, for being you!

With much love, admiration and appreciation,
Brenda Bouchard